Supporting our NATO allies over Nordstream 2 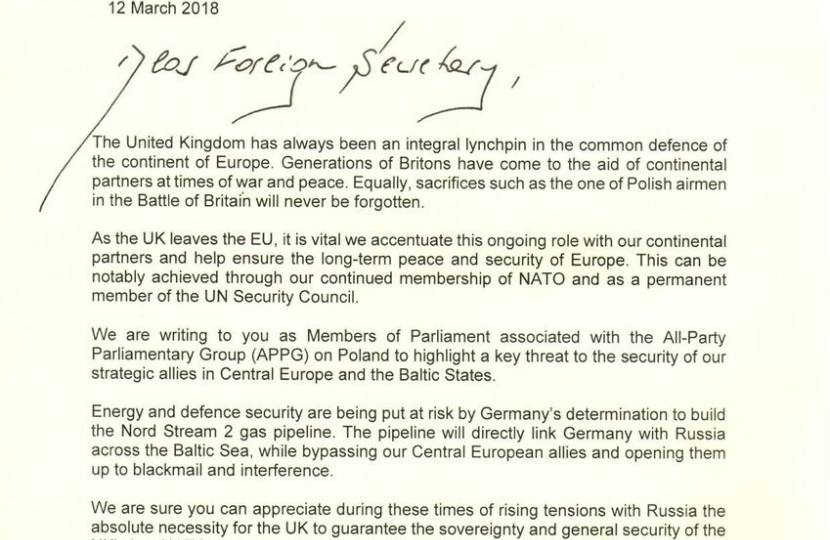 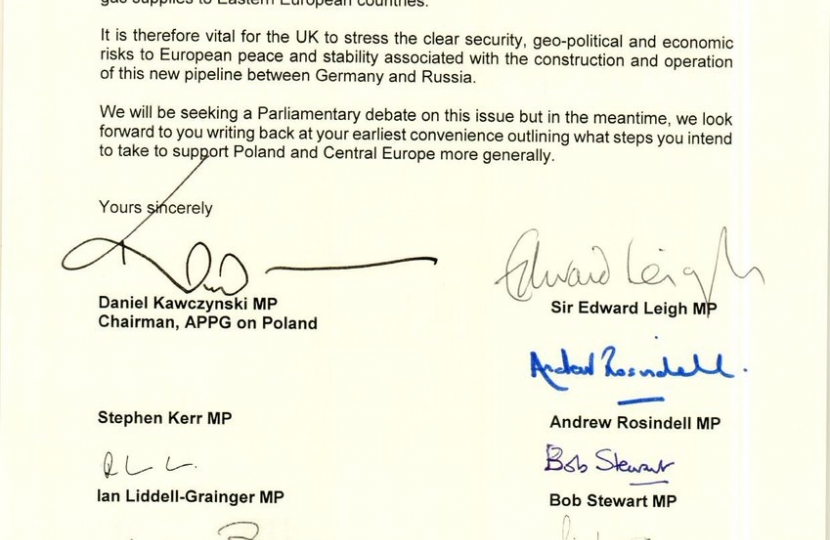 I have signed a letter to Foreign Secretary Boris Johnson, highlighting the Geopolitical threat of Nordstream 2. Nordstream is a proposed Natural Gas pipe which will link Russia to Germany, bypassing countries in Central and Eastern Europe including Poland and Ukraine.

The letter also highlights an upcoming Parliamentary Debate on the issue, in which MPs will have the ability to ask the Prime Minister to call for the pipeline to be blocked.

It is my view, along with that of other politicians in the UK and abroad such as Polish Prime Minister Mateusz Morawiecki and former US Secretary of State Rex Tillerson, that this pipeline has the potential to risk the energy security and defence of the UK’s allies. It could also seriously impact our own country.

There is very clear reasoning behind this thinking. By building this new pipeline, Russia will be able to send gas to Germany without it passing through Poland and Ukraine. Poland and Ukraine currently ferry billions of cubic metres of Russian gas per year through to Western and Central Europe, giving them considerable influence.

With the ability to pipe gas to Western Europe without going through Poland and Ukraine, Russia may be able to blackmail and increase it’s influence over these nations. Ukraine stands to lose 2 billion euros in yearly gas transit fees, which would hit the country financially. Former USA Sec. of State Rex Tillerson has added that the pipeline would threaten European energy security, as it could increase European dependency on Russian gas. These are all issues that I find deeply concerning for the stability of Europe.

It is an issue which can directly affect the UK, and Central Scotland. Grangemouth is a major employer in the Central Belt, and sustains 2,000 jobs in Stirling directly or indirectly. Our energy security and the security of the plant needs us to be vigilant against the threat of Russian influence in the energy market. The price of Gas also of course affects energy consumers, hitting the most vulnerable hardest.

I am therefore taking the position that the UK needs to stand with Poland, Ukraine, and other European nations at this time, and call on Germany to block Nordstream 2.